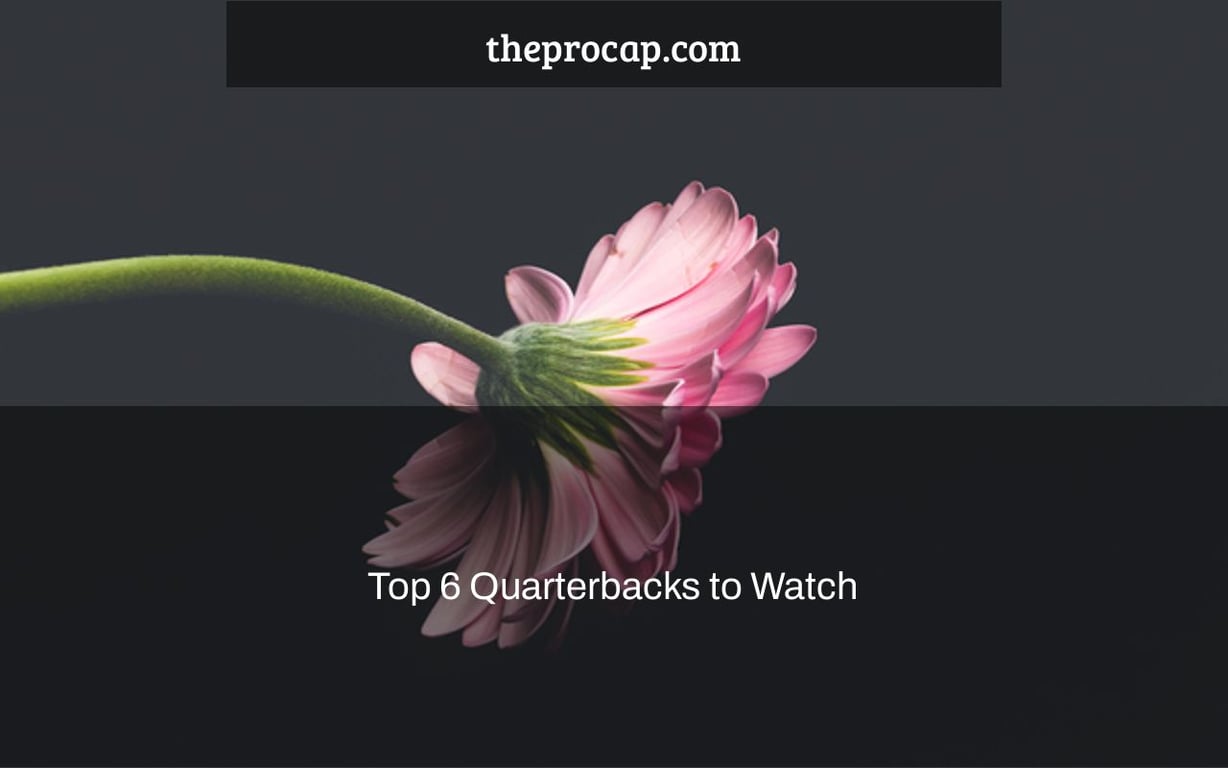 Once again, the NFL Combine is being held in Indianapolis. As the greatest college football prospects try to create a name for themselves, some of the more well-known players are opting out of the Combine.

Furthermore, several teams and head coaches, like as the Los Angeles Rams and San Francisco 49ers, will not be in Indianapolis.

Nonetheless, Indy has a lot of skill, and the quarterback position is usually one of the most interesting to watch. Although there are no Trevor Lawrence or Kyler Murray in this year’s quarterback class, there are numerous viable choices for a franchise quarterback.

Here are six quarterbacks to watch at the NFL Scouting Combine, as well as some information on Ole Miss quarterback Matt Corral, who will not be throwing at the event. Because of the uncertainty surrounding this position group, everyone of these players has a chance to make or break their case at the NFL Combine.

Matt Corral, Ole Miss, was given an honorable mention.

According to a source, Ole Miss quarterback Matt Corral will not throw this week at the combine as he recovers from an ankle injury sustained in the Sugar Bowl.

Corral began light throwing again two weeks ago, and the goal is to be ready for pro day on March 23.

When the NFL Draft starts at the end of April, Corral might be the first quarterback picked. Indy, though, he will not be slinging passes.

Corral is currently recovering from an ankle injury, so his Pro Day will be crucial as scouts attempt to get a peek of his potential.

In the 2019 season, the Rebels quarterback passed for 3,339 yards, 20 touchdowns, and just four interceptions, and in the 2020 season, he threw for 27 touchdowns and 2,995 yards. Corral will still be conducting interviews and other things of that sort, so he has a chance to impress organizations with his charisma even though he won’t be throwing passes.

Another wild card in this class is North Carolina’s Sam Howell. This is a typical occurrence, and there will almost certainly be no clear No. 1 quarterback until the draft. There was in the past, but this class is unlike anything we’ve seen before.

The Tar Heels, on the other hand, had a new offensive coach and plan, as well as a lot of weapons, including Michael Carter, Dyami Brown, Dazz Newsome, and Javonte Williams, who are all in the NFL.

Howell has a strong arm, but his mobility, like Carson Strong’s, is a problem for certain organizations.

To strengthen his case, Howell has to do well at the Combine, and mock drafts see him falling from an early first-round selection to a mid-second-round pick. It’s reasonable to say that Howell’s fate is still up in the air, and Indy will be crucial to his success.

All onboard the Malik Willis hype train are David Carr and Willie McGinest. Willis is by far the most unpredictable player in this class. Willis is projected to go as high as No. 2 overall in some mock drafts, while others have him as a second-round choice.

The former Auburn quarterback moved to Liberty and showed off all of his abilities, earning comparisons to Trey Lance, who went No. 3 overall in the 2021 NFL Draft.

There’s a case to be made that Willis has the most to prove, given his time at small-school Liberty, but there’s no questioning his skill.

Willis is inexperienced, which may be the only reason he isn’t the first quarterback off the board. But, like the play above, he is the new template of NFL quarterback, akin to Lamar Jackson, and if he plays well in Indy, he might solidify his case as the top signal-caller in the league.

Have you ever heard of Carson Strong? He played collegiate football at Nevada in the Mountain West Conference, therefore the answer is probably no.

Strong, on the other hand, is a rare talent with the finest arm in the draft class. Strong’s problem is his lack of movement, which has become a must-have for NFL clubs in recent years.

Strong’s cannon, though, is out of this world, and he is the prototypical pocket passer that teams have had such much success with in the past, such as Tom Brady, Peyton Manning, and others.

Carson Strong’s A-game version seems to be on par with any other QB in this class.

Strong, like the majority of the quarterbacks in this class, is an intriguing case. However, there is a chance that the Nevada quarterback will be the second QB off the board, particularly for a club like the Pittsburgh Steelers, who have a slew of offensive weapons.

Desmond Ridder was a key part of the Cincinnati Bearcats’ finest season ever and a berth in the College Football Playoff. Unfortunately for Ridder, Alabama proved to be too much for them.

Ridder, on the other hand, is determined to prove his value at the Combine. Ridder is more often than not ranked fifth among the top five quarterbacks in this class.

NFL clubs that value the following will be interested in Cincinnati QB Desmond Ridder:

* winners/culture-changers who’ve proven they can elevate a program * consistently improved 🎥 * dual-threats who will likely run 4.4’s at Combine * easy passers who make NFL throws like this 👇 pic.twitter.com/nb2LPt6k5l

In the NFL, development is really important; look at people like Justin Herbert and Patrick Mahomes, who broke expectations after being questioned at the draft.

Ridder might be a comparable example, albeit he doesn’t have the same ceiling as Mahomes or Herbert. However, he has the necessary talents and is a dual-threat quarterback in demand by NFL clubs. Furthermore, Ridder is more likely to be a second-round selection, so clubs who aren’t desperate for a quarterback might sit out Day One and hope to snag Ridder in Round Two.

In his last season with the Bearcats, Ridder threw for 3,190 yards, 30 touchdowns, and just eight interceptions, shattering his prior records. The pressure is on for Ridder, who can put himself in the mix for a first-round berth with a great performance.

The week of the combine is Kenny Pickett’s time to shine. In the interview process, he will blow teams away. I prefer a large heart over huge hands. With a player like Kenny Pickett on your team, you can win a Super Bowl.

Kenny Pickett has tiny hands, so be on the lookout. For whatever reason, it has been Pickett’s greatest slam. After a fantastic season, the Pittsburgh quarterback was named a Heisman Trophy candidate.

He went into his senior year after a poor career at Pitt and smashed every statistic he’d ever had. In his last season in college, he threw for 4,319 yards, 42 touchdowns, and just seven interceptions.

Those are impressive figures, and many people were surprised by his dramatic increase.

Man. Watching Kenny Pickett after Willis is hard. Only through two games he’s opted to take the quick checkdown over reading coverages and attacking downfield far too many times. Watch the slot receiver at the top of the screen. Tough to buy an older prospect w/ mediocre tools pic.twitter.com/L6fzIbcUXL

Pickett has a mixed bag. Some consider him the top quarterback in the draft, but others do not consider him a first-round pick.

Pickett, as Andrew Fillipponi points out, has the sort of demeanor that organizations want, and if he’s surrounded by a solid group, he should be OK (the Steelers make sense for several reasons).

Is he going to be a superstar? Pickett has a lot of Mac Jones vibes, and Jones was good enough to lead the New England Patriots to the playoffs in his debut season.

WKU quarterback Bailey Zappe deserves credit for being invited to the NFL Scouting Combine. It will be interesting to watch how high he gets chosen and how his career develops.

The Western Kentucky quarterback had an outstanding senior season, passing for an NCAA-best 5,545 yards, 56 touchdowns, and 11 interceptions. Yes, those are his genuine college numbers from his last year. Zappe threw 13 more throwing touchdowns than Heisman Trophy winner Bryce Young and roughly 500 yards more than the second-placed quarterback.

Zappe spent his first four years at Houston Baptist University before transferring to Western Kentucky, and what a change it was to leave Texas.

At the Senior Bowl, Zappe got a lot of attention, and with the appropriate coaching, he might develop into a genuine NFL starting quarterback. The NFL Combine will perhaps be the most significant for Zappe, owing to the fact that he isn’t as well-known as the other big-name quarterbacks.

Zappe as a Day Two selection might wind up being a bargain for teams, and if things go well at the NFL Combine, he could go much higher.

RELATED: 5 Players to Watch at the 2022 NFL Combine for the New York Jets

The “top 10 quarterbacks 2021” is a list of the top 6 Quarterbacks to watch. The list includes names such as Kyler Murray, Josh Allen, and Daniel Jones.

Who is the best quarterback for 2021?

A: In 2021, the Dallas Cowboys will have one of two options to be their starting quarterback. One option is waiting for a healthy Tony Romo and hope he can play at his former level once more. The other option is rookie Kyler Murray who has been dubbed as The Next Big Thing by analysts since entering college football in 2018.

Who are the top 5 QB right now?

Who is the best QB in NFL right now?

A: That is hard to answer, but I can tell you the quarterbacks that are currently on each team.