The NFL Draft is a chance for teams to find future starters and build their depth. But the 2017 draft was rife with bad quarterback picks, so I re-graded all 10 of them using PFF’s grades.
The results are not pretty: only 1 QB in this year’s class would have been drafted as high as he went (Deshaun Watson) while 4 more wouldn’t have gone until Round 3 or later despite strong scouting reports on them at the time they were chosen. 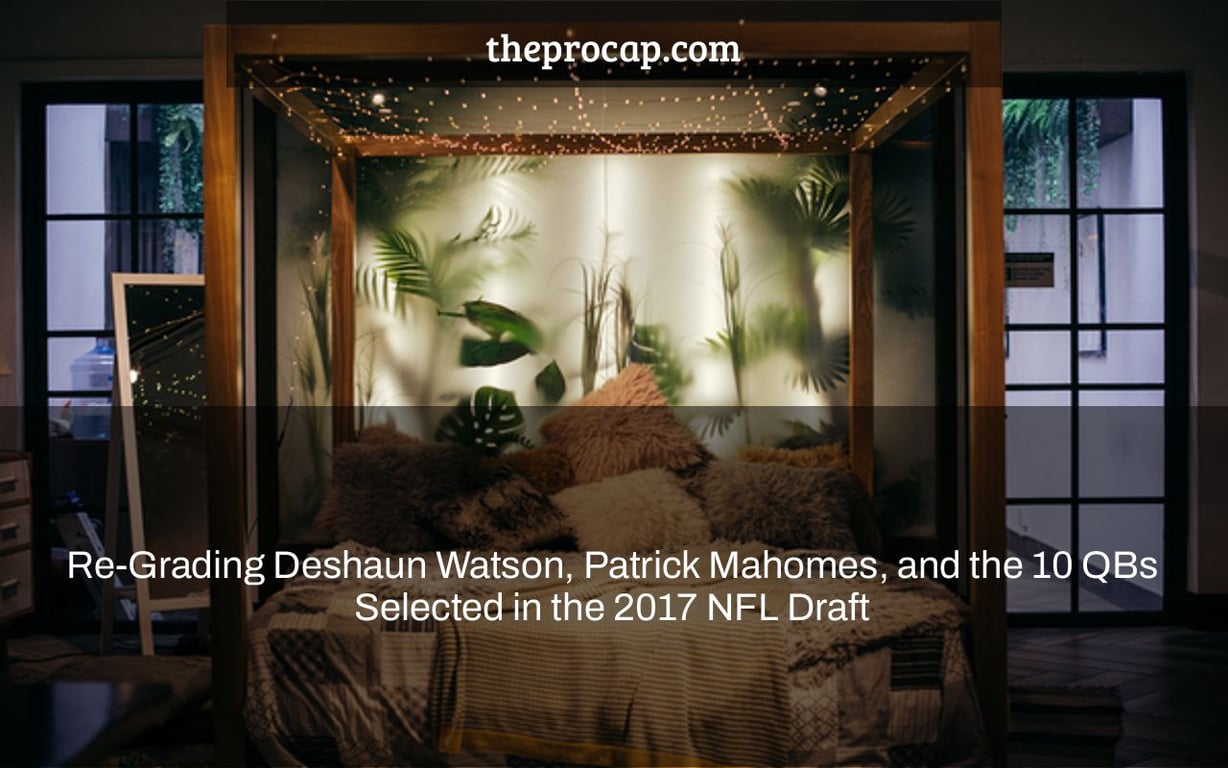 It’s cliche to call the NFL Draft a “inexact science,” but that’s exactly how it is. Teams have a lot of hits and misses every year. As positive as each club would want to be on draft day, there’s no way to know how well they’ll perform until the ball is kicked off the next year. It might take considerably longer when players are maturing over a longer period of time.

Where did the 2017 NFL Draft quarterbacks end up?

According to ESPN, the quarterbacks were selected in the 2017 NFL Draft in the following order:

After perusing that list, it’s safe to assume that the selection order would be drastically different if the clubs possessed the gift of foresight before selecting.

Who among the 2017 NFL Draft class’s best performers?

Patrick Mahomes and Deshaun Watson will forever be linked by the 2017 NFL Draft. Sunday on CBS, they’ll square off against each other on the field for the first time. pic.twitter.com/9KdHul4VNc

Although Mahomes was not the first quarterback chosen, he has been the most successful. The 26-year-old has not only put up eye-popping numbers with his innovative and steady performance under center, but he has also won a Super Bowl.

Watson slid after a successful career at Clemson, falling 12th overall to the Texans. He’s had a statistically successful career in the NFL since then, establishing himself as one of the best quarterbacks in the game until being dealt to Cleveland amid his own trade requests and sexual assault claims.

Trubisky was the first quarterback selected. He was given a chance as a backup in Buffalo after disappointing in Chicago. He’ll now have the opportunity to take over for Ben Roethlisberger in Pittsburgh. Trubisky wasn’t the worst quarterback in the draft, but his play since being taken hasn’t justified his high ranking.

What happened to the remainder of the 2017 NFL Draft class?

While Patrick Mahomes and Deshaun Watson are the apparent standouts from this draft, they aren’t the only quarterbacks who have found success in the NFL. Both Trubisky and C.J. Beathard seem to have the ability to be career backups and borderline starts if necessary.

If clubs were to redraft with this group of quarterbacks, Mahomes and Watson would almost certainly be the first and second picks, respectively. Watson may be preferred by some clubs over Mahomes, but they’d be the first two off the board. Trubisky and Beathard figure to be next in line after that. If their performances are any indicator, it’s difficult to say where the others will end up.

How Did Eight Tight Ends Get Drafted Before George Kittle?

The “2017 nfl draft order” is a list of the 10 quarterbacks selected in the 2017 NFL Draft. Deshaun Watson, Patrick Mahomes, and the other quarterbacks were all re-graded after their first season in the NFL.

Full Dates, Times, and TV Info for All 32 Teams

The Dallas Cowboys Have the Easiest 2022 NFL Schedule, NFC East Has the Four Easiest Overall