The Pittsburgh Steelers decided they would target the top 5 players in free agency, but who are those players? We rank them below and explain why each player is needed by the Black and Gold. 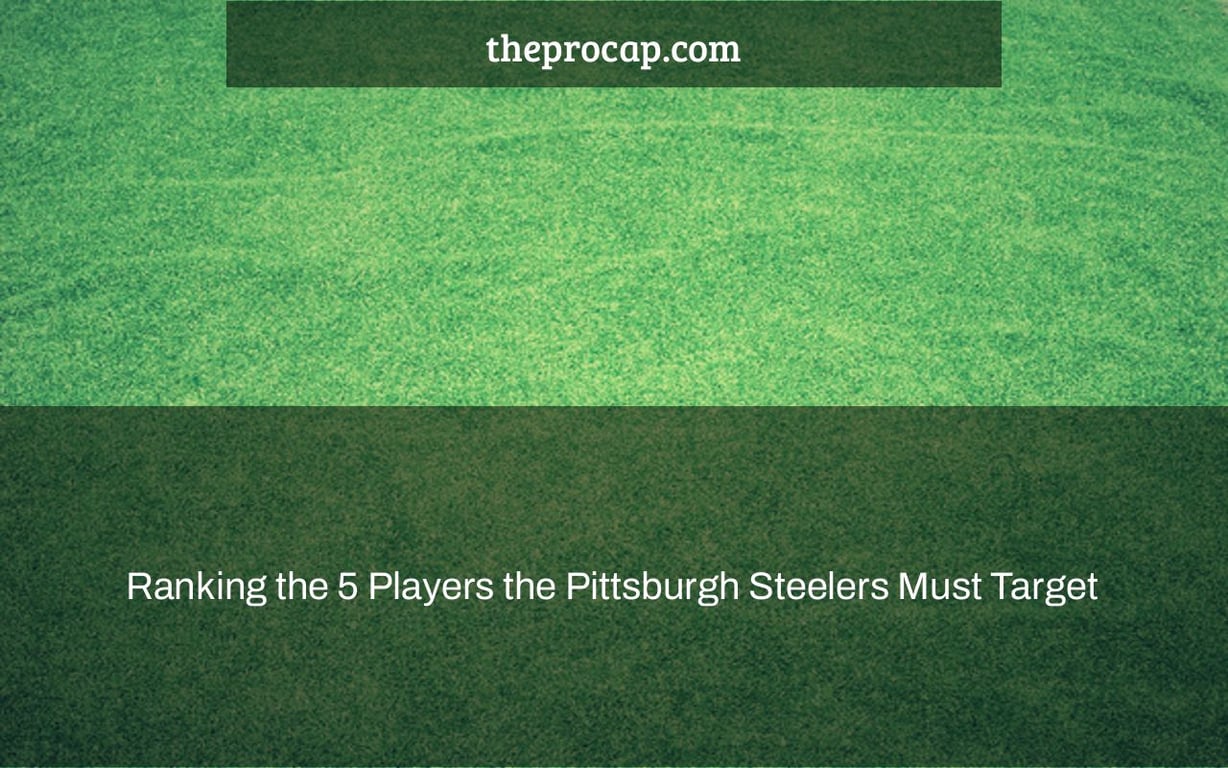 The Pittsburgh Steelers had a hit-or-miss season in 2021. Mike Tomlin’s team finished the regular season with a 9-7-1 record, just missing out on the playoffs. Despite the fact that Pittsburgh was done for the year, it survived a rocky start.

Kevin Colbert is in his last summer as general manager of the Steelers, and he’ll be aiming to put the team up for future success. Going into NFL free agency, the club has $29.5 million in salary space and various issues to address. Pittsburgh’s front seven, offensive line, secondary, and quarterback room all need to improve.

Once free agency begins, the Steelers should aggressively target these five players.

Throughout the 2021 season, the Pittsburgh Steelers struggled with inconsistent offensive line performance. The inside of the unit was shakier, but the squad needs to add skill across the board. Morgan Moses might be a top free agent target in the NFL.

After spending his first seven seasons in Washington, Moses spent the 2021 season with the New York Jets. Over the years, he’s been as dependable as they come, starting every game since 2015. In 2021, he had a 71.0 rating from Pro Football Focus.

Moses’ experience would be a great match for a Steelers offense that has a lot of young guys. He might also have an instant effect on the team’s performance on the field. The offensive line allowed 38 sacks last season, and the Jets’ bookend would immediately improve the unit. In 1,022 plays, Moses only allowed four sacks.

In 2021, the Steelers had a lot of trouble stopping the run. They allowed the most running yards per game in the NFL, at 146 per game. In the offseason, improving the front seven must be a top emphasis.

Joe Schobert, the team’s inside linebacker, is an unrestricted free agent who might become a cap casualty. Kwon Alexander, who is more athletic and younger, may be a good free agent addition in the NFL. For the New Orleans Saints in 2021, the 27-year-old has 50 tackles, seven tackles for loss, and 3.5 sacks.

The Steelers are waiting for Devin Bush, a third-year linebacker, to take the next step in his growth. Bush may learn a lot by putting a former Pro Bowler in charge of Alexander. The Steelers must return to a physical defense in 2022 if they are to improve.

Darious Williams of the Los Angeles Rams took a step back in 2021, although he built a name for himself in the previous two seasons. Between 2020 and 2021, the UAB product allowed 58.1 percent completions and a 79.8 quarterback rating.

Joe Haden, a seasoned cornerback, might leave the Steelers in free agency. Arthur Maulet and Ahkello Witherspoon are also unrestricted free agents. The pass defense was in the top ten in the league, allowing 215 yards per game and 24 passing touchdowns. Losing depth, on the other hand, may be problematic.

Williams and the Rams just won the Super Bowl. If Pittsburgh is able to sign him, he will bring championship experience with him. Williams is also a good match for the Steelers’ defensive scheme. He’s not the largest corner, but he’s tough and won’t back down from a fight with receivers.

The Steelers’ interior offensive line is now one of their most glaring flaws. Throughout the season, this unit had a lot of trouble. The front office cobbled together a haphazard mix of players, which first seemed to be a disaster. The offense improved as the season proceeded, but its struggles kept the offense from moving forward.

Laken Tomlinson, regardless of position, is one of the greatest offensive lineman available in NFL free agency. Over the last four seasons, the Pro Bowl guard has been a picture of consistency, starting every game. For the 2021 season, Pro Football Focus awarded him a 75.9 rating.

Running back Najee Harris was picked by the Steelers for a reason. They want to reclaim their dominance on the ground. Harris had a good first season (1,200 yards and seven touchdowns), but he may have had a better one if he had a better offensive line. The guard from the San Francisco 49ers would fill a huge need on Pittsburgh’s roster.

While all of the positions discussed are important for Pittsburgh’s success in 2022 and beyond, the quarterback position will get the most focus. The front management is looking for a successor for Ben Roethlisberger and is leaving all of its options open. However, the Steelers must make informed decisions. They should search elsewhere since the solution isn’t presently on the roster.

Jameis Winston of the New Orleans Saints makes a lot of sense in Pittsburgh. He’s recovering from an ACL injury, but it looks like he’s doing well. The Steelers are unlikely to make an impact by pursuing a high-profile quarterback. Winston is definitely a better match for them.

Before being wounded, the Heisman Trophy winner was having a great season. In seven games, he passed for 1,170 yards, 14 touchdowns, and three interceptions. The Steelers now have the elements in place to compete. Winston provides them with the opportunity to win games. In the worst-case scenario, he may serve as a transition quarterback for the next franchise quarterback.

RELATED: The 5 Players the Baltimore Ravens Must Target in Free Agency

The “steelers defensive line” is the most important position group for the Pittsburgh Steelers. The team must target players who can make an impact on the field, and they need to be able to provide depth as well.